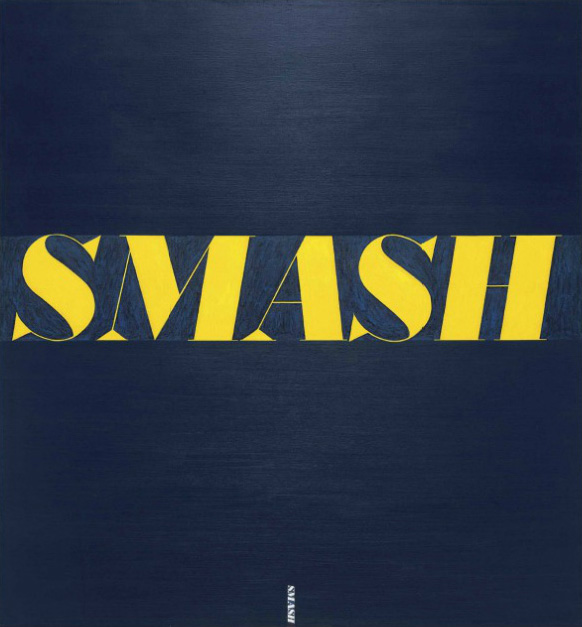 Ed Ruscha (b. 1937) is an American painter, photographer, printmaker, and book artist known for his involvement with the Pop Art movement of the 1960s. Since the start of his career, in Los Angeles, Ruscha has used words in his paintings, fusing image and text with the high art of painting, in response to a Hollywood environment of mass media in which words and images dominate actual and virtual space. He states that words “live in a world of no size”. Works, such as “BOSS”, 1961, “OOF”, 1962, and “NOISE”, 1963, are early examples in which text populates the visual space of painting, similar to the way a company logo adorns a billboard. Text also decorates reality in the form of commercial signage. Ruscha soon discovered that text on buildings could also be used as subject matter for his wordplay. “Standard Station”, 1963, and “Norm’s, La Cienega, on Fire”, 1964, are images of words coupled with location. Displayed in the context of painting, “Standard” refers to a company brand as well as its own definition, signaling the painting itself as “standard”. “Large Trademark with Eight Spotlights”, 1962, is an earlier gesture that works in a similar fashion of appropriation. The painting’s dimensions mimic those of the movie screen, and the subject matter geometrically references a film still of a train speeding by. These techniques are used to comment on the more cinematic qualities (scale, presence, role as cultural producer) that overlap with what we call art. Ruscha borrows from the visual culture of cinema and cross-pollinates it with the language of painting and art. Ruscha naturally progressed toward a radical use of landscape as metaphor for stage-set and flatness. In “Every Building on the Sunset Strip”, 1966, Ruscha presents a record of photographs of the work’s title in an accordion-style book. In this book, a series of deadpan photos of buildings unfold page to page, creating a long, stage-like façade. The book becomes the stage-set and in this sense, physical location is flattened and shared through channels of mass distribution, much like film production or the spread of any commodity. Art is not immune to commoditization and Pop Art identifies art as commodity. Ruscha’s appropriation of landscape also extended to his painting practice. Similar to elevator music, Ruscha’s backgrounds function like cinematic backdrops, upon which messages float. The messages are like actors, legitimizing themselves by their mere appearance on stage (the painting) and by the act of speaking. Similar to a filmsetting, the action in the foreground (the words) is not entirely related to the backdrop or scene. This is a clever spin on normal figure/ground relationships that characterize much of modern art history. Text takes the place of figure and because it says what it is, it is afforded the ability to separate from allusion and disassociate itself from pictorial dependency. Text or dialog, in the space of a painting, becomes a shared reality, something that we all can read/view and process. In Ruscha’s imagery, grammatically incorrect phrases or fragments are often depicted. He seizes this incorrect use of language and claims it as his own, rendering solid a modern history of speech that doesn’t typically find its way into the written document. He thereby legitimizes these phrases in the same way that Hollywood legitimizes cultural values and behavior. See “Not a Bad World, Is it?” 1984, “Talk Radio”, 1988, and his more recent “Mountain Series”. Ed Ruscha is represented by Gagosian Gallery. See also John Baldessari, James Rosenquist, Andy Warhol, Richard Prince, Jenny Holzer, Barbara Kruger, and Bruce Nauman.