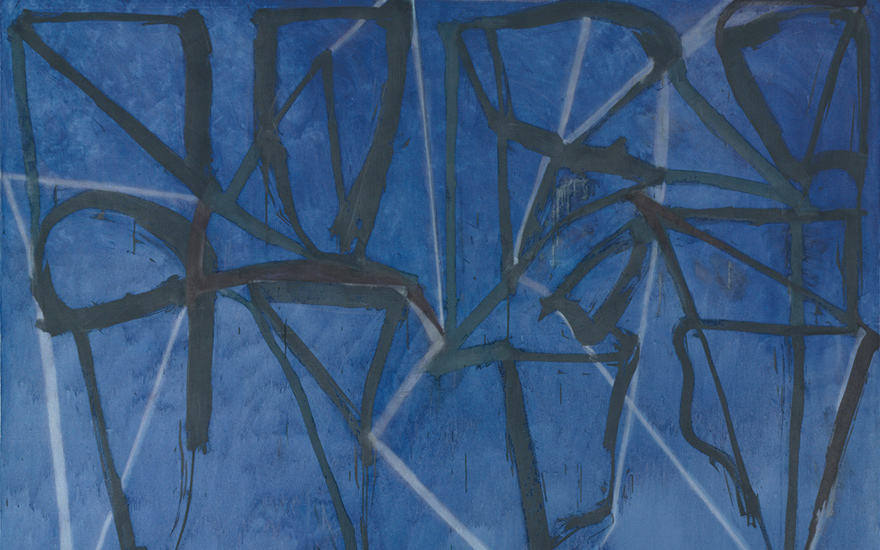 Brice Marden (b. 1938) is an American artist associated with the Minimalist painting movement of the 1960s. When one thinks of Minimalist painting, one generally thinks about the artwork as object, one in which all figural or representational suggestions of anything other than the work itself is removed. Marden’s work borrows the ‘look’ of Minimalism, namely the monochrome, and relies upon memories of places, among others, to inform the work’s main suggestive element: color. Filling the monochrome with subjective suggestion, especially that of landscape, is a romantic gesture, not typical of the monochrome’s history and certainly not completely in line with the principles of Minimalism and Conceptualism. One could even argue that appropriating the minimalist work in this manner is a Pop gesture. Marden’s work is a blend of influences that marries the emotional, soulful approach of the Abstract Expressionists / color-field painters from the 1950s with the formalist qualities of the monochrome. In his early mature works from the mid 1960s, such as “The Dylan Painting”, 1966, the history of the making of the work is recorded on a small sliver that runs horizontally across the bottom of the canvas, below the monochrome’s edge. In this area the primed canvas and the subsequent layers of paint can be viewed, suggesting memory with its drip-like marks referencing both Abstract Expressionism and the history of the painting’s making. The hand-made scrape-marks permeate the seemingly uniform monochromatic color-field, created by Marden’s use of a spatula scraped over his brush-applied blend of oil and wax. By the late 1960s Marden’s works take the form of triptychs and diptychs. Monochromatic panels are butted next to one another in horizontal or vertical arrangements that recall and suggest place, as seen in “Grand Street”, 1969, and later “Sea Painting I”, 1973-74. With works such as “D’apres la Marquise de la Solana”, 1969, Marden reflects upon the color palette of a Francisco Goya of the same title. His use of the color-field continues throughout his career (see "Ru Ware Project", 2012). Beginning in the mid 1980s, Marden, influenced by Asian calligraphy, begins another body of work that breaks his dedication to the monochrome with an exploration of line and the interaction of color. Previously explored in his “Greece Summer” drawings from 1974, Marden’s exploration of the erratic line develops through works like “Summer Scroll #8 (Five Kinds of Hydra Trees)”, 1986, and matures in his “Cold Mountain” series from the late 1980s. This later develops into colorful abstractions, such as “6 Red Rock 1”, 2002 and “The Propitious Garden of Plane Image, Third Version”, 2000-06, in which layers of line serve as records of the work’s own historical mapping, a theme that encapsulates his oeuvre. Brice Marden is represented by Matthew Marks Gallery. See also Frank Stella, Ellsworth Kelly, Robert Ryman, Robert Mangold, Jo Baer, John McCracken, Richard Serra, and Carl Andre.