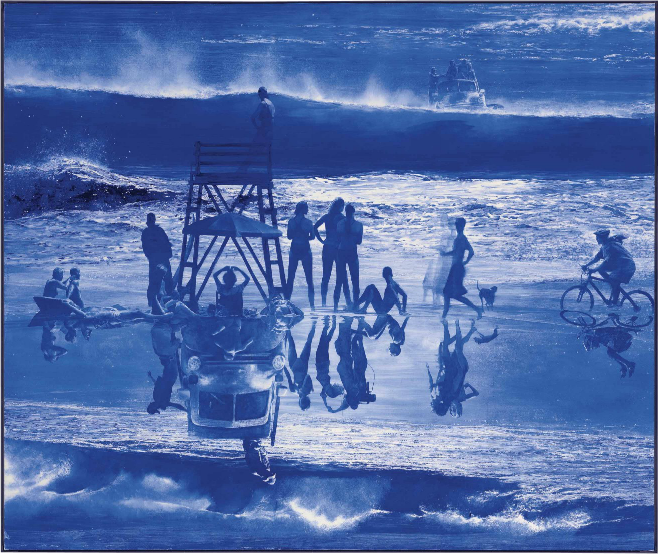 Mark Tansey (b. 1949) is an American representational painter living and working in New York City. Tansey, deeply aware of critical theory, has explored and realized the potential of the painted image in a world dominated by photographic accuracy. Since the late 1800s, artists have been immersed in a program to remove the ‘life-like’ or ‘real-looking’ from painting, in order to find ‘art’ in its difference from ‘accurate’ representation. High art painting by the 1970s had mostly been stripped of any mimetic renderings of landscape and figure. This mirroring of visual reality was largely considered the concern of photography. Within this absence, of the “real” in painting, Tansey re-approached representation through realistic depiction, to present impossibilities, to make pictures about picture-making, employing visual puns, paradoxes, inaccuracies, and contradictions. Tansey’s illusions are often commentaries on art itself, on painting, and what it means to be engaged in a traditional art practice within a modern conceptual context, once pitted against the wild pastiche of the 1980s Neo-Expressionist movement. His works demonstrate that within this environment of the conceptual art object, the realistic painting, taken to Tansey’s extremes, is of intense importance. Since 1980 Tansey has used a limited monochromatic palette, which he cleverly reclaimed from photography’s past (see Edward S. Curtis) and uses to his own subversive ends. He pushes the territory of photographic representation or illustration well past the limits of photography to include an entanglement of reference and illusion. “Action Painting II”, 1984, plays on the term action painting from Abstract Expressionism, in which all pictorial representation was lost in favor of gestural recording. Tansey freezes the intense action of a space shuttle launch and metaphorically positions it as a specimen of action that can be observed like a still life, inside the picture’s dimension of illusion and outside the picture as real-world gesture. Similar to Magritte, Tansey’s paintings are full of tricks of the eye. However, Tansey’s tricks are not as obvious. They are often hidden and camouflaged, either in the landscape or in the riddles suggested by the painting’s figures. Works such as, “EC 101”, 2009, conceal the faces of famous men from Ronald Reagan to Alan Greenspan within the mountain’s illusive façade. Histories overlap and multiple realities co-inhabit the fields of Tansey’s unified color. In 1990, he began to incorporate text as pictorial device, which furthered his obscurity of ‘meaning’ allowing for more oppositions and contradictions inside the picture frame and out. His themes range from Derrida and deconstruction to economic collapse and culture clash. We can imagine Tansey’s perspective as allegorized in “The Innocent Eye Test,” 1981, in which it is inferred that it is impossible for the ‘real’ cow to be fooled by the ‘painting’ of the cows, that the version of reality inside the ‘old painting’ is irrelevant, it’s unaware, obvious, flat, non-participatory, and solely an exhibit of technique or scientific index. However, with Tansey’s juxtaposition of the ‘real’ cow with the ‘depicted’ cows, Tansey’s picture as a whole escapes a classification of mere ‘realism’ or ‘photographic’ and enters into a multi-dimensional dialogue that involves subversive strategies of the history of painting and representation itself. Mark Tansey is represented by Gagosian Gallery.