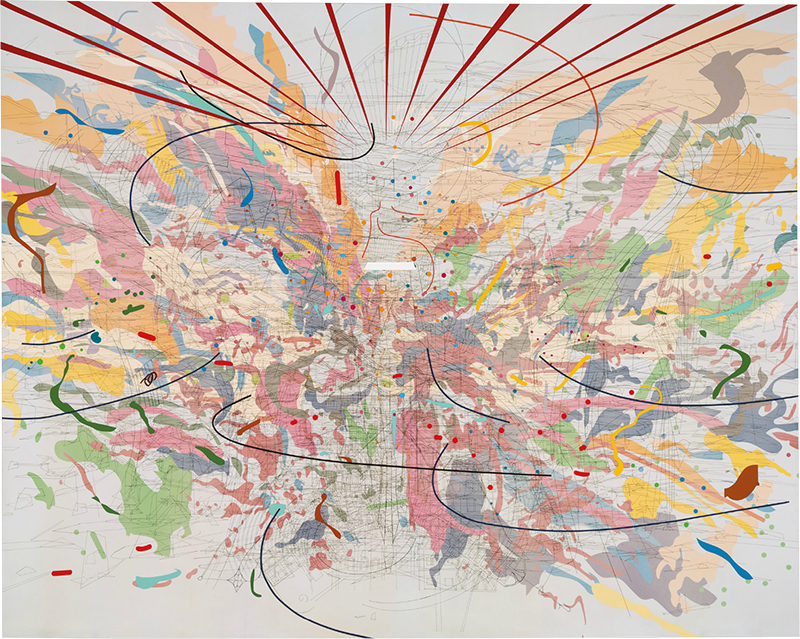 Julie Mehretu (b. 1970) is an artist born in Ethiopia, now living and working in New York City. She is known for her large-scale abstract works on canvas. Segments of architectural renderings, building plans, charts, city maps, military fortifications, stadiums, airports, flags, pop-culture detritus, etc, are combined using computer software and projected onto canvas where they are mapped and traced, often erased, over and over again until the work feels finished. In these geometric abstractions, Mehretu uses pencil, pen, ink, and acrylic paint to create intersections of color and line, dust-clouds of erasure and mark-making that reflect upon a world of redefinition, overlapping borders, globalism, upheaval, accelerated motion, and technological interconnectivity. With her architectural deconstructions, Mehretu is able to depict a world of multiple-perspectives as a whirlwind of activity, recorded directly on the canvas, using images and drawings that when combined are allegiant to no time but the present. Recollections of the past are combined with renderings for the future. Mehretu came to rapid prominence in the early 2000s with these chaotic abstractions. As a child, growing up in Ethiopia, Mehretu experienced the upheaval and instability of a world in flux when her parents relocated to the United States after fleeing a Socialist dictatorship on the rise in 1977. As apart of a generation once removed from African “decolonization”, Mehretu reflects upon histories in conflict, one’s that clash and eventually blend. In “Mogamma: A Painting in Four Parts”, 2012, Mehretu abstractly combines images of cities, past and present, that have been host to global upheaval and change. Not only is Tahrir Square present, as site of the Cairo’s Arab Spring, but also Tiananmen Square, and Occupy Wall Street’s Zuccotti Park. Mogamma is the name of a government building in Cairo that when translated from Arabic means “collective”. Mehretu creates colossal reports of merger that symbolically summarize the feeling of what it is like living through this history. Her abstract visual history of capitalism, “Mural”, 2010, adorns Goldman Sachs’ ground floor entrance lobby in Lower Manhattan. Julie Mehretu is represented by Marian Goodman Gallery in New York and White Cube in London. See also Mark Grotjahn, Mark Bradford.