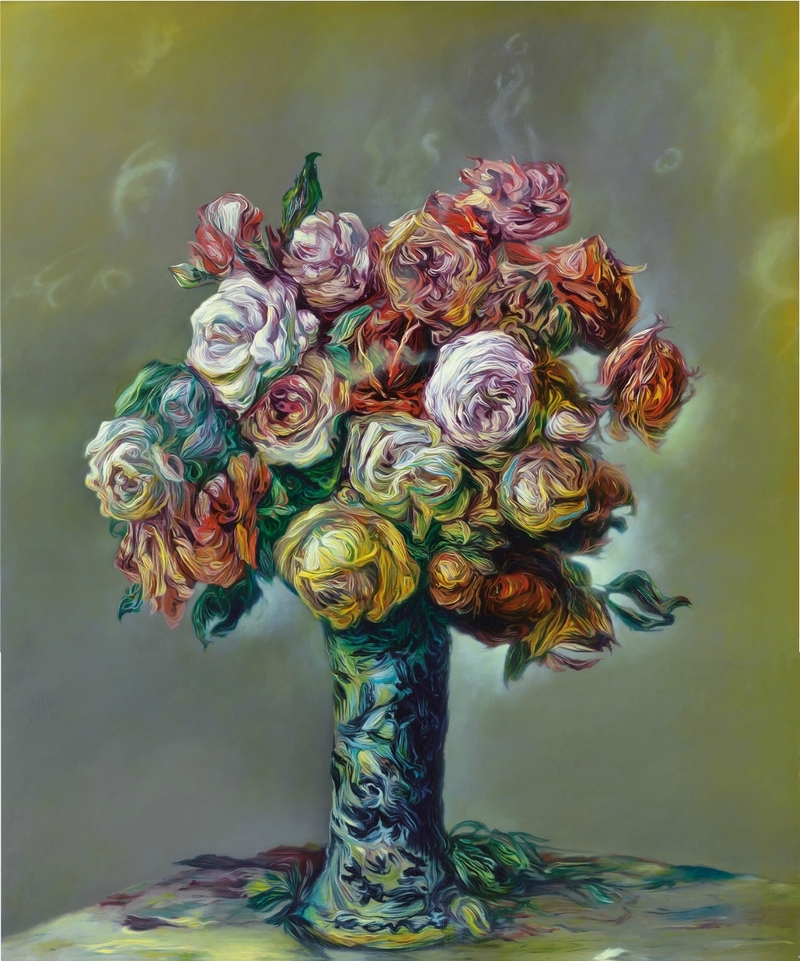 Glenn Brown (b.1966) is a British artist known for appropriating reproductions of paintings by artists (both living and dead) into his work. He takes pictures from Fragonard, Delacroix, Courbet, Renoir, Frank Auerbach, and Georg Baselitz, among others, and uses Photoshop to alter the image’s color, height and width relationships, background, and orientation to fit his needs often combining elements from other images. (Compare Fragonard’s “A Boy as Pierrot” and Brown’s “The End of the 20th Century”, 1996. Or Rembrandt’s “Saskia as Flora” and Brown’s “Death Disco”, 2004.) Once the image has been determined on the computer, Brown copies the image using very small brushes. He completes about 5 or 6 paintings a year. Despite the textural or impasto look of the completed painting, the image surface of the works is as flat and smooth as a photograph when viewed in person. His titles are just as elusive. He chooses the names for his paintings from albums, films, and science fiction literature. Influenced by post-structuralist Jacques Derrida, Brown maintains that one cannot have an original thought and this serves as the inspiration for his use of appropriation, choosing to paint the paint and painting. Brown uses colors that look putrid, rotten, or somber when used to portray flesh and figure (see “Youth, Beautiful Youth”, 2008) or still life (see “Burlesque”, 2008). This gives his work a death-like appearance that contrasts with his delicate and precious brushwork. Brown’s painting style developed from his early appropriations of science fiction illustrations, images meant for small-scale book reproduction, transformed into large paintings of traditional landscape scale. These works, often copies of work by Chris Foss (compare Brown’s “Bocklin’s Tomb”, 1998 with Foss’ “Floating Cities”) or Tony Roberts (compare Brown’s “The Loves of Shepards”, 2000 with Roberts’ “Doublestar”), occupy gallery walls as if they are alien visitations, future worlds drawn in the past, revisited, and made doubly futuristic. Brown’s works float in time and space and almost everything about his paintings are used to emphasize this, from subject matter to illusionist, trompe l’oeil brushwork of gaseous swirls. Brown states: “I like my paintings to be sitting nervously on a fence. Neither one thing or another.” Glenn Brown is represented by Gagosian Gallery. See also Jeff Koons, Richard Prince, Frank Auerbach, and Georg Baselitz.