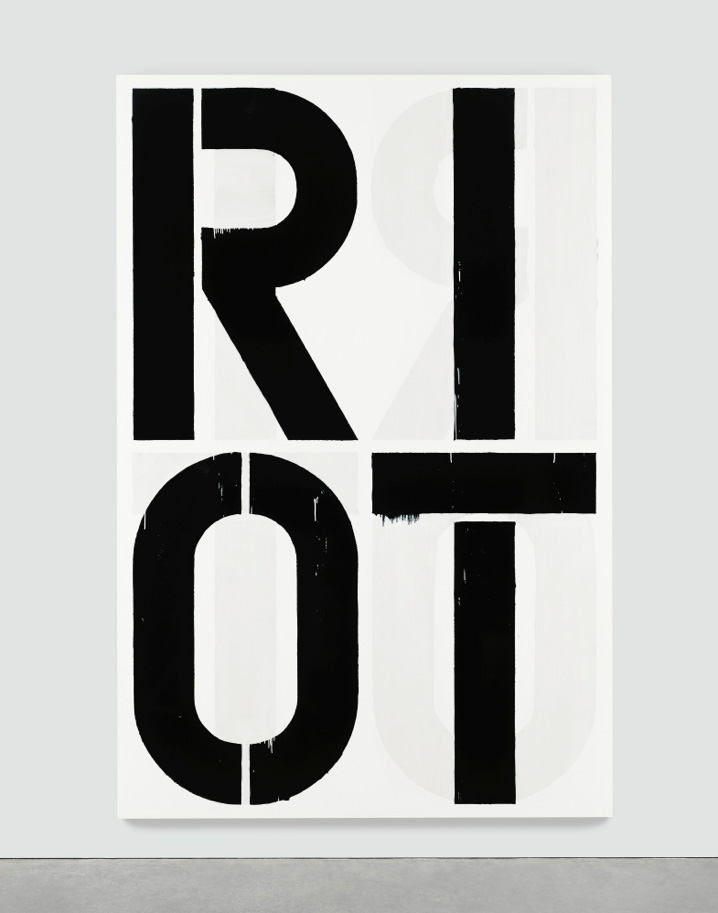 Christopher Wool (b. 1955), an American painter, has worked primarily in black and white since the mid 1980s. He is most well known for his 75 (more or less) text paintings that he made between 1987 and 2000. He uses tools loosely associated with painting, such as stencils, rags, solvents, spray paint, patterned paint-rollers and stamps as well as applications such as enamel on aluminum, a process more associated with sign-painting. In 1986, Wool had his first major breakthrough after observing workers painting a corridor outside his New York City studio using pattern embossed paint rollers to create a cheap wallpaper-like effect in the deteriorating building. After purchasing similar paint rollers, Wool applied the technique to sheets of aluminum creating a smeared or slippery pop-like appropriation as in "Untitled", 1987. Another fortuitous observation occurred one year later when he encountered a white delivery van bearing the words “SEX” and “LUV” spray-painted on its side. Wool began his text works after this occasion using stenciled letters to crudely apply enamel (sometimes alkyd) on aluminum filling the towering works with phrases such as “RUN DOG RUN DOG RUN”, “SELL THE HOUSE SELL THE CAR SELL THE KIDS”, “FOOL” and “TRBL”. The words, interrupted by the edge of the aluminum, continue on the lines below, creating legible and illegible works that perpetually drift between literal signage and incoherent painting, a fusion one can easily recognize when trying to understand any work of art. In addition to his text works, Wool creates abstract works that involve mark-marking and then erasing with solvent-soaked rags leaving smears and drips that document the removal, creating an effect that recalls Richter’s “Table” or Rauschenberg’s “Erased DeKooning”. Wool also uses silkscreen to recreate smaller images of stains onto larger canvases further suspending our perception by asking: if a work is a copy of another abstract painting, is it itself abstract? Amidst the loud color of the New York City 1980s art scene, (Julian Schnabel, Jeff Koons, Cindy Sherman and Richard Prince) Wool’s black and white works utilize an aggressive technique of iconography, a device that continues to dominate visual experience today, and poetically merges this with subversive agendas. Christopher Wool currently lives and works in New York City and Marfa, Texas and is represented by Luhring Augustine Gallery, New York. See also: Ed Ruscha, Albert Oehlen,Brice Marden, Wade Guyton, Jasper Johns, and Robert Gober.