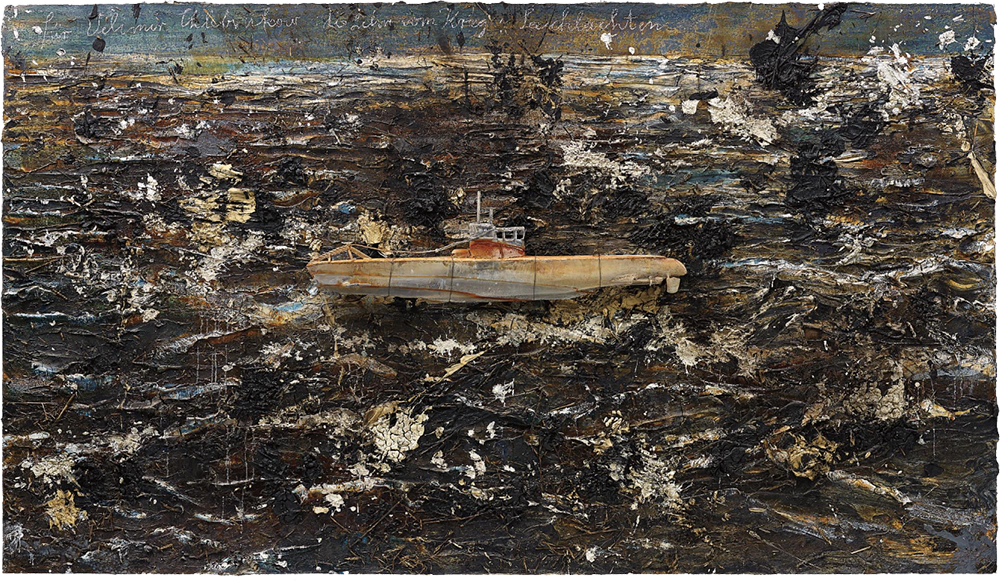 Anselm Kiefer (b. 1945) is a German painter and sculptor living and working in France. Kiefer's work is known for confronting Germany's dark past directly, addressing the Holocaust, Nazi rule, and national identity. He began his artistic career, as a photographer. In his first exhibition "Occupations", 1969, Kiefer presented photos of himself giving the Nazi "Heil Hitler!" salute in countries such as France and Switzerland and outside famous landmarks, such as The Coliseum. Posed in military garb, Kiefer's controversial self-portraits were made to call attention to the artist's identity and heritage as fact, refusing to forget, choosing to address. Most artists at the time would rather not recall nor use any part of this German history as subject matter. Soon, Kiefer turned his interests in political identity to painting. Inspired by Joseph Beuys, whom with he studied intermittently beginning in 1970, Kiefer was encouraged to use cultural myths, metaphors and symbols to engage and understand history. Similar to Beuys, Kiefer began to use non-painterly and fragile materials such as glass, straw, and plant parts. For Kiefer, these materials contrast the dense and solidified subject matter of history and mythology. His paintings throughout the 1970s and early 1980s incorporate German mythology and text in a continued preoccupation with Germany's Nazi past. "Margarethe", 1981, made of oil and straw on canvas, borrows Paul Celan's famous poem "Death Fuge". In 1980-83, Kiefer made paintings based on the National Socialist Architecture of Albert Speer and Wilhelm Kreis. "To the Unknown Painter", 1983 depicts Hitler's Chancellery in Berlin and his "Interior", 1981 depicts a room inside the New Reich Chancellery. By the mid-1980s, Kiefer turns from his reflections on Germany to broader themes of worldly trauma, exploring universal myths of existence. He since has explored themes, such as the cosmos, in "Starfall", 1995, and in "Light Compulsion", 1999 suggesting that earthly matter is just as cosmic as the stars. This tension between private conscience and public or universal awareness and engagement can be seen to unify Kiefer's oeuvre. Intrigued by mysticism, his sculptural works since the late 1990s depend heavily upon lead as preferred material and metaphorical device for alchemical transformation. (See "The Secret Life of Plants", 2001). In 2002 he began working with concrete. With "Jericho Towers", 2006, Kiefer created structures reminiscent of those seen in World War II concentration camps contrasting the strength of concrete against the weakness of the towers overall organizational structure. Arguably his studio, in Barjac, Southern France, is his greatest work to date. It is an ongoing project spanning 35 hectares of industrial landscape transformed into archives, installations, underground chambers, tunnels, storerooms and concrete towers. It takes on the appearance of an abandoned decaying city, strangely embodying a past that never existed. Anselm Kiefer is represented by Gagosian Gallery and White Cube. He lives and works in France. See also: Georg Baselitz, Gerhard Richter, Neo Rauch, and Jannis Kounellis

Video: Behind the scenes: Anselm Kiefer's studio at Barjac. From: Royal Academy of Arts
View Lot