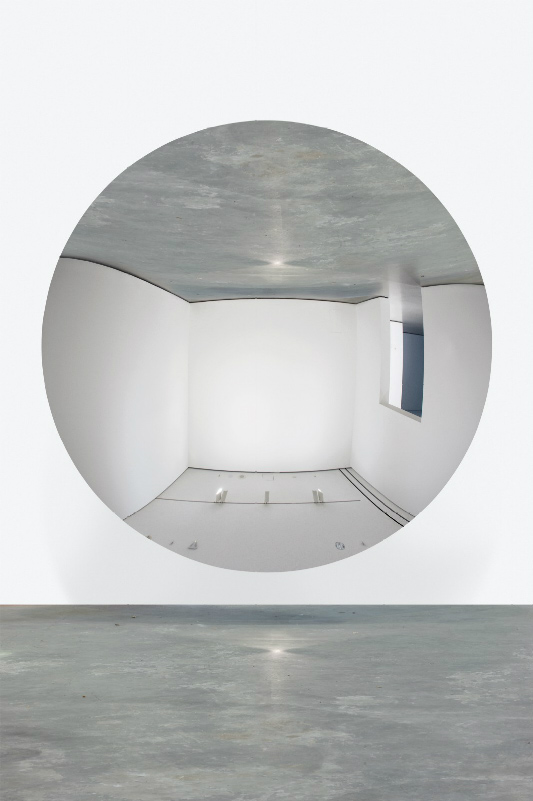 Anish Kapoor (b. 1954) is an Indian sculptor, living and working in London since the 1970s. He is known for his large-scale sculptures and installations that stage or call attention to a void or lack of space, creating what he identifies as spiritual space for the viewer. He first became well known in the 1980s for his pigment sculptures. In these works, such as “White Sand, Red Millet, Many Flowers”, 1982, brightly colored pigment forms sit on the floor, and have been described as having an effect of rising out of the floor, an illusion that Kapoor thinks of as akin to icebergs emerging from the ocean. Framing or suggesting emptiness, or simply distorting actual space by reflection, are techniques central to Kapoor’s very physically present sculptures. They claim to point the viewer to a void, a spiritual space. However, one only arrives at this “spiritual space” via the skin of Kapoor’s illusory materials, which in turn makes the work seem deceptive in a playful Disney or funhouse-like manner, that might cause the viewer to think about vanity exploitation as much as spirituality. Toward the late 1980s Kapoor began working with stone to frame this man-made void. “It Is Man”, 1988-90, and “Void Field”, 1990, both use sandstone and pigment to create a tension between voluminous mass and the void contained. In 1995, Kapoor began working with polished stainless steel and other reflective surfaces to create works that mirror and distort reality. “Turning the World Inside Out II”, 1995, and “Making the World Many”, 1997, are early examples of works that stimulate the viewer’s perception by alteration. “Cloud Gate”, 2006, and “C-Curve”, 2007, continue his reflective statements to much larger and more public environments. In 2007, Kapoor created “Svayambh” (translated to “self-generated) for exhibition at the Musee des Beaux-Artes, Nantes. Sitting atop rails a 40-ton block of red wax slides its way through the narrow passageways of the museum’s interior leaving a blood-red residue in its wake. In this way, Kapoor is just as interested in filling voids as he is emptying them out. (See also “Leviathan”, 2011). “Shooting into the Corner”, 2009, also uses red wax and embraces an equally charged sexual reference as “Svayambh”. The artist, via a canon, penetrates space by shooting 20-pound shells of red wax into a gallery’s interior. Kapoor’s sculptural oeuvre of orifices, voids, pregnant bulges, and explosions create popular attractions that captivate and amuse audiences with sexual suggestion, vanity, prescribed spirituality, and illusion. He is the 1991 recipient of the Turner Prize and received a Knighthood in 2013. Anish Kapoor is represented by Lisson Gallery in London and Gladstone Gallery in New York. See also Jeff Koons, Richard Serra, and Christo.